QUESTION 1: “What in the world does she want & what are we supposed to do?”

Meredith chose to create a poem based on my painting entitled “Doors and Secrets” that she found on my Artist website.

Meredith could barely contain her enthusiasm. She told me that she just could not wait another month to enter! Plus, she did not want me to cancel if no one spoke up and told me that they were really, actively interested in participating in my initiative.

Note: She had me there! To be honest, I admit that  thought has crossed my mind, that I should cancel, that I must be crazy to do this.... I asked myself why was I doing this...and the answer is always the same:  I just know that I must do it. I had the idea for a long time. Plus, I thought "it's my idea, so why not me?" and "why not right now?" So, here I am...doing it - whether I am ready or not! So, to Meredith and to all the others: I promise that I will not cancel! But I do request that you please, please enter and do not let me down with an empty email inbox at the end of August. Okay? Enter (often) and spread the word WIDELY!

...So, back to Meredith. She said "call it 'shaking out the cobwebs'..." or "practice," but she said she simply had to dig in now... Meredith told me she was inspired by my piece and wrote the following poem in one sitting. She also told me she doesn't think she is finished with this painting yet... Isn't that exciting?!

So, I am sending heartfelt thanks to Meredith and including her piece, below. I hope she enters the formal competition!


Secrets...secrets...  Doors and Secrets,
Secrets and Doors...
Doors to secrets and more...

Family secrets. Personal secrets. Maybe not all bad... But how bad?

One door could lead to freedom,
But a kaleidoscope of choices taunts with its promises of resolution, joy, hope, and sought-after "found memories."

But these people somehow know that if they pick the wrong door at the wrong time in space, it could open to unspeakable things...secrets best kept behind those painted, closed doors.

Secrets...secrets... Doors and Secrets,
Secrets and Doors...
Doors to Secrets ...and secrets, more.

Trapped ...
Frozen in Time...
Prisoners of their indecision (and to be honest, their fears).
Tied to each other in some way...somehow.
Connections in time.
Secrets. Secret ties that bind.

Players frozen on that fateful stage.
Masks in place.  Is it a cage?

Just waiting...
evermore hoping for a clue, a script change, something that will point to which door leads to freedom.  An eternity of indecision.

Trapped inside (or outside?) their technicolor doors... Silent secrets bind their tongues.
They remain choreographed to a space
in time
beyond reach of the exit door,
the door to freedom, deliverance...

And still, they wait... and wait...
for the scene to play out,
for the answer to appear,
for the stage crew to arrive
and begin
to disassemble the doors
...and unravel the secrets
...and remove the staircases
they know are unsafe for their weight...

Masks in place. Frozen in time. Waiting for THE END.

- By Meredith
(Pseudonym for Elaine Weiner-Reed)


Note:
I am very pleased to share this with you....I have permission to cite my viewers by their first name and publish their entry and questions and they have allowed me to share their words and ideas to serve as samples for you of WHAT TO DO and WHAT NOT TO DO.

Where needed, I will provide amplifying information in my replies to these fellow Creatives.

Meet  "Donovan," a poet from Pennsylvania…

A writer known as "Donovan" chose to create a poem based on a painting entitled “Primal Scream” found on my Artist website. Donovan thought he might like to enter the competition, and wanted to see if he was on the right track.

As the excitement grew with the idea of creating something inspired by a painting created by another based on ideas beyond his own Muse, he wondered how to go about it, and thought “What the heck…! I’ll try something and then ask her (= ME!).”
Great idea!
So, that is exactly what our poet did: He chose a painting that intrigued him, then picked up his pen and wrote… Donovan then reached out to me to ask if his approach was in line with what I had in mind with my EVERY-PAINTING-IS-A-SONG collaboration initiative.
I told him that is EXACTLY what I had in mind and envisioned. Well done, Donovan! He had given us a great example of how to proceed!

As a quick note, so you are not angry with me and do not feel bad for him, Donovan realized from the beginning that his “inspirational painting” choice would likely not be featured in my “Honoring the Journey (Revealing Layers)” Solo Exhibition and would therefore be ineligible - since it resides in the permanent collection of the Southern Nevada Museum of Fine Art (SNMFA). Nonetheless, Donovan said it was not a loss for him. He was excited, focused on creating, and found it energizing. Plus, he also realized that he would be helping others…and helping me…by writing his poem and reaching out to me.

Here is my painting…


Here is "Donovan’s" poem inspired by my painting “Primal Scream” …

It Ended and Began with one Primal Scream

A loss and pain so deep…

I had an uninvited guest the other day: Pain came knocking.
Pain so intense and set on its purpose…
Pain like an armor-piercing arrow to my heart…
Pain entered…and then took root.

…and one that I never saw coming.

Even though I maybe should have….
So, things were bad.
And scary…because my reserve of sustaining memories
...of light and hope... was swallowed up in that Black Hole, that sink hole of pain.
Primal.  Bottomless. Soul-splitting pain.

I was paralyzed in pain for heaven knows how long.
Finally, I knew what I had to do first.
To begin to heal, I had to honor the loss, memorialize the pain…
Only by first letting go…could I move on.
Only then, in the aftermath of such pain, could I begin the slow crawl to healing.

So, finally, I let it rip: that ear-splitting, octave-breaking,
wailing and endless primal scream.
It might have lasted for weeks...eons.

A loss and pain so deep.

I embraced it as humanity’s scream, torn from the womb…

Connected in and beyond time and space, stretching and reverberating across planet, solar system, heavens…
Timeless and solitary – universal.
Oh, powerful, deep, and primal scream.

Shrouded now and quiet: With you, came rebirth.

- By "Donovan" (Pseudonym for Elaine Weiner-Reed)

Sheila chose a painting from my website entitled “Coloring Outside the Lines” that WILL actually be part of my Solo Exhibition and therefore would have been a valid entry if submitted after the launch date – but which she did not know at the time. (Note: This entry is ineligible, however, for reasons I will explain shortly.)
Sheila thought the idea of the EVERY-PAINTING-IS-A-SONG collaboration initiative was to PAIR my painting to an Existing Song.

Answer: No, Sheila – that was not the intent of this initiative and cannot happen. No existing or copyrighted songs or material may be used unless you are the author/creator and give your permission!


So, what we can do, however, is show you Sheila’s song choices as examples of songs that do map to one of my paintings, but that were NOT inspired by or created based on the painting.  Does that make sense?

Reminder: All creative writings/music/songs submitted to this competition MUST be the original work of the creative person submitting and not anything created by someone else--and most especially not a famous/celebrated OTHER creative person.

Now, that said, as I told Sheila, her idea of pairing a song to a painting is correct and within the parameters of the EVERY-PAINTING-IS-A-SONG collaboration initiative, but I explained that any song entered must be HER creation—an original—and one that was created based on or inspired by one of my solo show paintings in my "Revealing Layers" Solo Exhibition.
Sheila’s thought process and example can still help us, however, if we can imagine that the FAMOUS SONG (and therefore copyrighted!) that she paired to my painting were her own.

Here is my painting… 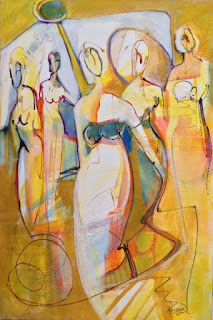 Here, Sheila paired existing songs by OTHER musicians [a no-no] to my painting “Coloring Outside the Lines”

Note: WHAT WE NEED FOR THIS COMPETITION ARE ONLY ORIGINAL LYRICS/MUSIC CREATED BASED ON INSPIRATION FROM ONE OF MY PAINTINGS. No copies or plagiarized works permitted!


Sheila chose two different and famous songs she felt conveyed stories she could visualize mapping to or as interpretations of my painting.

I confess that while I like both her choices very much, that would be illegal and not allowed in this competition.
To participate, Sheila must now create her OWN, ORIGINAL SONG and pair it to one of my paintings in the show.

“Going to the Chapel”
https://www.youtube.com/watch?v=rTq7w8P6_2I 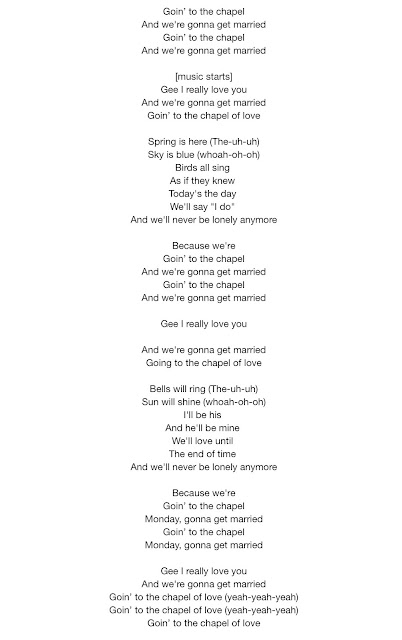 
Note: I hope these Examples from Donovan and Sheila are helpful.
I appreciate and thank them for their interest, time, and talents!


All images and content remain the property of the Artist.

Popular posts from this blog

Elaine Weiner-Reed - "Every Painting is a Song" 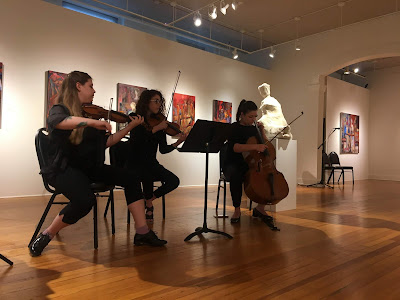 Elaine Weiner-Reed's  Cross-Discipline Creative Collaboration     "Every Painting is a Song"     Open Invitation Elaine asks: "If my paintings were songs, how would they sound to you…?" Elaine Weiner-Reed - "The Gathering - Still Waiting"          On 6 June 2018, at the artist's solo exhibition at Maryland Hall for the Creative Arts, the talented trio Rogue Collective interpreted several of Elaine Weiner-Reed's paintings and sculptures in Musical improvisational creations.      Original Art  | Original Music  An improvisational piece by the Rogue Collective Cellist Natalie Spehar responding to and inspired by  Elaine Weiner-Reed's painting "The Gathering - Still Waiting" Elaine Weiner-Reed - Mirror, Mirror In the artist’s own words…       " M y art focuses on unraveling the complexity and mystery of human emotions, behavior, and relationships, featuri
Read more

Hello from Creative License Studio & thank you for visiting.   I appreciate your time, interest, and patronage. Let's get right to the heart of the matter, shall we?...                Today's post focuses on my cross-discipline Creative Collaboration. What :  EWR's "Every Painting is a Song" Creative Collaboration Challenge   When : Launches 14 May 2016  Deadline :  All Competition Entries must be received before 30 August 2016      Then what?   Please be patient.                         Decision notification will begin on 1 November 2016      But ...BEFORE THEN, I will post updates and information on this blog, so please stay connected.      You may also email me at any time via the Every Painting is a Song" email address: everypaintingisasong@gmail.com. Important Note for Songwriters :       You will send me your  musical compositions via email AND/or via YouTube sharing - to me ONLY and/or small
Read more